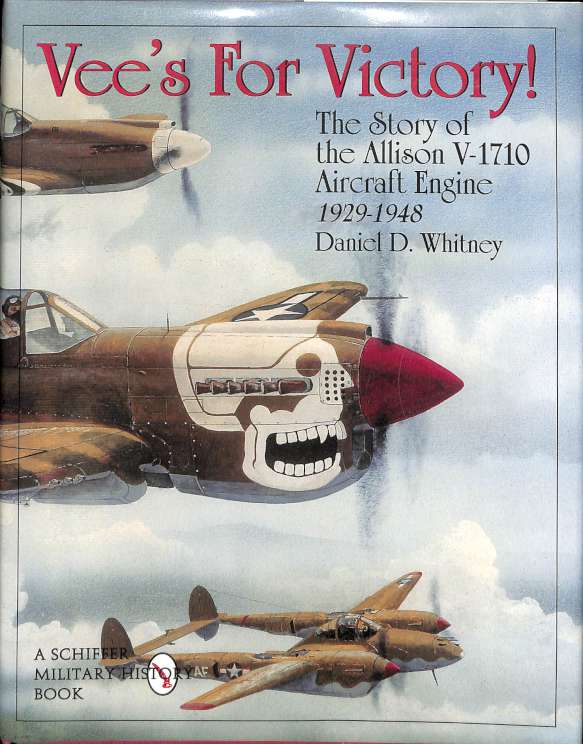 (Kom13) Over 60 percent of U.S. Army fighters during World War II were powered by the Allison V-1710 engine. It was a strong and reliable power plant that powered the pre-war generation of 400 mph Army pursuits, and the majority of Army combat fighters on through World War II. Even so, the V-1710 was controversial and often maligned, considered by some to have been a "second-rate" engine. Author Whitney's objective was to find, and tell, the true story of the 70,000 V-1710's and the people who built them. A critique of Vee's For Victory! was provided by the Editor of Wings Magazine, August 1997, who wrote: "Presenting the 1929-1948 story of Allison's V-1710 engine in a revealing investigative style that uncovers a great deal of new material, this well-illustrated volume represents something seldom seen these days - pure, original research. Combined with lucid writing and penetrating analysis, Vee's for Victory! recounts Allison's up and down career from Curtiss XP-37, through the XP-58, and GM XP-75 Eagle. In between are all the major fighters which utilized the Allison, including the P-38, P-39, the lightweight fighters XP-46A and XP-47, as well as the early P-51 Mustangs. Author Dan Whitney carefully and seamlessly grafts the histories of these aircraft to their engines and supercharger components, relying on new information from aero engineers and test pilots to present what is sure to become a milestone in the recording of aviation history."